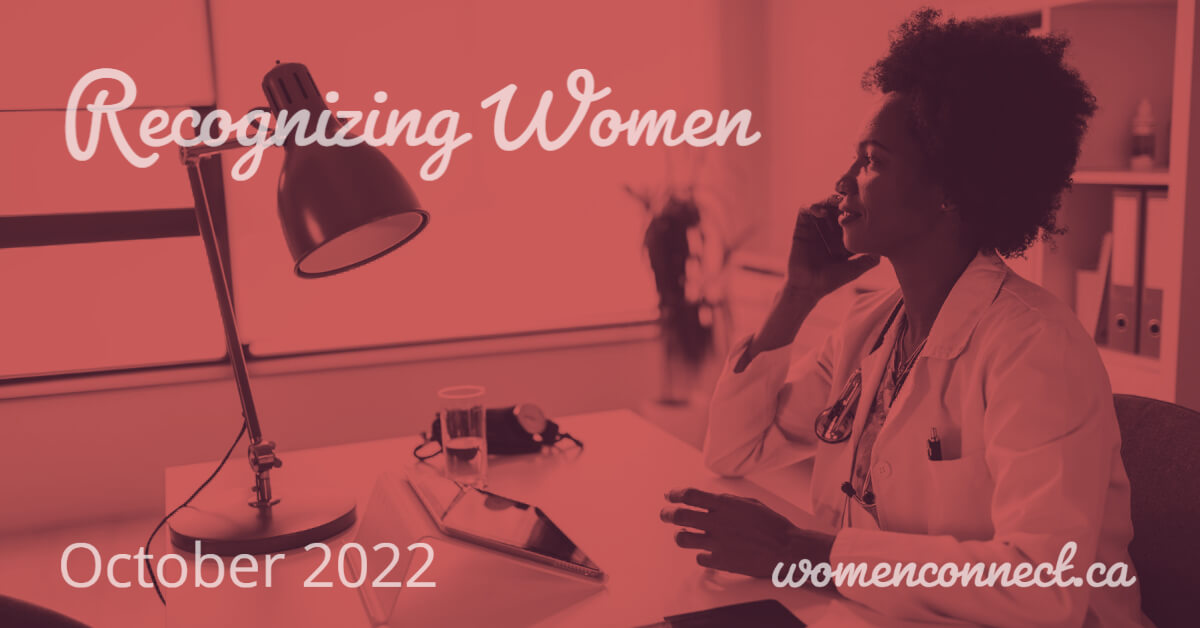 Hello everyone! If there was ever a month to mark the journey of women in Nova Scotia and Canada, then October is it. The Days of Awareness this month are both thought and emotion evoking. They give us both pause to reflect and reason to celebrate. We at Connect offer you these insights to do both. Be Well.

Mi’kmaq History. During the month of October, the Mi’kmaq History Month Committee was formed to raise awareness of Mi’kmaw culture, history, and legacy, as well as to stimulate educational and cultural activities. This year’s event will centre on relationships and the idea that “We Are All Treaty People.” The subject will delve into the connections between Mi’kmaw diplomacy, treaty-making, and denial, as well as rebirth and reconciliation.

Treaty-Day is celebrated on October-1st. In 1985, the Supreme Court of Canada affirmed the Treaty of 1752 was still strong and called upon Her Majesty to honour the Treaty and others made with the Mi’kmaw nation. In 1986, the then Grand Chief Donald Marshall Sr. proclaimed every October 1st as Treaty Day. It commemorates the key role of treaties in the relationship between the Nova Scotia Mi’kmaq and the Crown. People continue to gather in Halifax on October 1st to participate and enjoy various cultural events in celebration of Treaty Day. It is a reunion for many Mi’kmaq and a time for people to learn a part of Nova Scotia’s 12,000 year-old history.

Breast-Cancer-Awareness is celebrated and recognised in the month of October.  Even though more  individuals are surviving breast cancer than ever before, it still  remains the most frequent cancer among Canadian women and the second leading cause of cancer mortality.  Statistics show that one out of eight women in Nova Scotia will develop breast cancer in her lifetime. Very early detection of breast cancer improves the chance of a cure. The Nova Scotia Breast Screening Program has been developed to assist in the early detection of breast cancer. The program offers women information on breast health and mammography (breast X-ray).

During Breast Cancer Awareness Month in October, you can make a difference in the lives of individuals who have been affected by the disease, by donating or participating in awareness raising activities.

Learn how you can support women with breast cancer

Sisters-in-Spirit is marked on October-4th. Every October, communities throughout Canada come together to remember and honour the Missing and Murdered Indigenous Women (MMIW) and their families, offering support, educating the public, and commemorating their lives. The annual Sisters In Spirit Vigil is proudly hosted by the Native Women’s Association of Canada with provincial and local groups. The Saskatchewan Association of Chiefs of Police is one of a few policing bodies that report statistics on missing persons. Its latest data indicates that almost 45 percent of people who vanished between 1940 and 2020 were Indigenous, despite representing just over 16 per cent of the population in a 2016 census.

The annual Sisters in Spirit Vigil brings together people of the community and urges them to speak up. We get together to demand that our mothers, aunties, sisters, and daughters not perish.   In 2016 the federal government and the 13 provincial and territorial governments launched the National Inquiry into Missing and Murdered Indigenous Women and Girls. The National Inquiry’s mandate was to examine the systemic causes of all forms of violence against Indigenous women, girls, and 2SLGBTQQIA+ people in Canada, including the underlying root causes of violence and particular vulnerabilities. The National Inquiry broadened the term “all forms of violence” to include issues such as family violence, institutional racism in health care, child welfare, policing and the justice system, and other forms of violence that stem from the same structures of colonization, such as those who died from negligence, accidents, or suicide, or those whose cause of death is unknown or disputed. The Inquiry also examined institutional policies and practices in place to respond to violence against Indigenous women, girls, and 2SLGBTQQIA+ people.

Here is a link to the subsequent  2022 Progress Report on the Missing and Murdered Indigenous Women, Girls, and 2SLGBTQQIA+ People National Action Plan

International-Day-of-the-Girl in 2022, we commemorate the 10th anniversary of the International Day of the Girl (IDG). In these last 10 years, there has been increased attention on issues that matter to girls amongst governments, policymakers and the general public, and more opportunities for girls to have their voices heard on the global stage. Yet, investments in girls’ rights remain limited and girls continue to confront a myriad of challenges to fulfilling their potential; made worse by concurrent crises of climate change, COVID-19 and humanitarian conflict. Girls around the world continue to face unprecedented challenges to their education, their physical and mental wellness, and the protections needed for a life without violence. COVID-19 has worsened existing burdens on girls around the world and worn away important gains made over the last decade.

International Day of the Girl Resources

Pregnancy and Infant Loss Awareness Day is celebrated on October-15th. Thousands of families throughout Canada mourn the loss of their newborns every year. In 2017, 1,699 babies died during the first year of their lives, while 3,159 were stillborn. Parents become alone in their grief, and the taboo associated with child death stops society from discussing the devastating consequences for parents and their families.

Rural-Women-Day   is celebrated on October-15th. Women in rural areas, who play an important role in agriculture, food security, and nutrition, already face challenges in their daily lives. They are now less likely to have access to appropriate health care, vital medicines, and immunizations due to COVID-19 and their health needs in distant places. Rural women’s access to health treatments can also be hampered by restrictive societal norms and gender stereotypes. Furthermore, many rural women face isolation, ignorance, and a lack of access to crucial technologies that could help them enhance their job and home lives.

Intl-Day-to-Eradicate-Poverty is celebrated on October-17th. Millions of people living in great poverty in a society marked by unparalleled levels of economic progress, technological means, and financial resources is a moral outrage. Poverty is a multifaceted phenomenon that comprises a lack of both money and fundamental ability to live in dignity.   Learn More

Person’s Day is celebrated on October-18th.  In 1927, five women who have since become known as the Famous Five launched a legal challenge that would mark a turning point for equality rights in Canada. Emily Murphy, Nellie McClung, Louise McKinney, Irene Parlby and Henrietta Muir Edwards were journalists, politicians, reformers and activists from Alberta who asked the Supreme Court of Canada to answer the following question: does the word “person” in Section 24 of the BNA Act include female persons? After five weeks of debate, the Supreme Court decided that the word “person” did not include women.

Although shocked by the Court’s decision, the Famous Five did not give up the fight and took their case to the Judicial Committee of the Privy Council of Great Britain in London, which was then  Canada’s highest court of appeal.

“The exclusion of women from all public offices is a relic of days more barbarous than ours. And to those who would ask why the word ‘person’ should include females, the obvious answer is, why should it not?”

There are sharable images here https://women-gender-equality.canada.ca/en/commemorations-celebrations/womens-history-month/persons-day.html