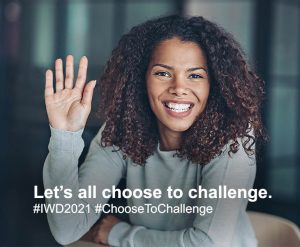 The theme this year for International Women’s Day 2021 is ‘#Choose To Challenge’.

We are all responsible for our own thoughts and actions everyday, all day. We can choose to call out bias and inequality to promote change for identified women and girls and help to forge a gender equal world. A challenged world is an alert world and from challenge comes change.

So let’s all #ChooseToChallenge.

International Women’s Day (IWD) roots stemmed from the early labour movement for better wages and working conditions for women and later with women’s’ struggle to win the right to vote. In 1857, garment workers in New York City’s lower east side demonstrated for equality, improvements in working conditions and better wages. Conditions did not improve and great unrest and critical debate was occurring among women. Oppression and inequality was spurring women to become more vocal and active in campaigning for change. In 1908, 15,000 women marched through the streets of New York City renewing their call for shorter working hours, better pay, and the right to vote. In 1910 at an international conference of working women in Copenhagen, a woman by the name of Clara Zetkin tabled the idea of an international womens’ day – a day dedicated to women’s struggles for equality.

On March 25,1911 a fire in a New York sweatshop took the lives of more than 120 working women and girls, most of them Italian and Jewish immigrants. Unsafe conditions contributed to the deaths. Factory doors were locked, either to keep workers at their sewing machines or to prevent them from stealing scraps of cloth.

A year later in 1912 a textile strike lasting three months in Lawrence Mass. united dozens of immigrant communities and later became known as the “Bread and Roses” strike named after a poem by James Oppenheim. This poem became associated with IWD. The bread signifying fair wages and economic justice and roses associated with dignified conditions representing quality of life.

When thinking about the theme for this year #Choose To challenge it brought to mind all the struggles of the many strong, independent hardworking women that came before, culminating the importance of challenging to create change. Without the strength to challenge we would not have moved toward any kind of equity and challenge is an investment to progress toward gender equality.  How we regard women and gender equity is reflected in all aspects of our lives – home, work, political and social and it is in attitudes and behaviour that change really happens. If gender equality happens at that level then the rest will fall into place.

And all of this can be linked to the ‘feminist movement. The term ‘feminism’ can not be defined in a single phrase for it can have a different meaning for many individuals, but the one thread that is woven throughout is the action for equality between the genders and the fight against the patriarchal system. This would change the power structure ending womens oppression and construct new models of social relations.

Despite the passage of legislation condemning some of the most flagrant manifestations, everyday women are caught in situations, where for various reasons just because they are women, they are marginalized, suffer discrimination, violence and even killed. In less brutal but still exploited ways
women suffer because their work is still not valued as much as men’s work and domestic chores are still women’s domain.

Feminism is a way of seeing, feeling and acting which leads to a consciousness awakening process – challenging to bring about change.

Current feminism appears more complex, adding a broader look at racism, sexism and issues of global proportions and philosophical thought. It is a jumble of ideologies and womens’ understanding of the connections between issues is deeper.There is an incorporation of tools such as art for protest and action and use of technology to broadcast and portray the issues that feminists are addressing now. This, as everything, comes with a down side. As quickly and efficiently as the technology, the messages that are forwarded are just as fast and unwavering.

When looking at the importance of promoting change we need to look at the messages that are being received and the media is a huge demonstration of this. Many forms of the media teach to view women as sexual objects rather than human beings. Because of this women’s identities are eroded from the time they are children and they are being taught through media how they should look, dress and act by their sex. Violence is normalized and sexual abuse eroticized.  This challenge is one that has intensified in the last number of years and has been done in the name of monetary gain. From a standpoint of equality this reinforces the established sexual stereotypes that the feminist movement has been combating.

It is imperative for all of us to challenge this and all aspects of life that impact on inequality. To be courageous enough to voice our concerns and values respectively and purposely so that we can all recognize we are who we are based on OUR values, strengths and limitations not on our gender.
We need to learn as a society to assist individuals regardless of gender to develop critical skills so they can decode and navigate the environment they live in.

So to Choose To Challenge must not be looked at as a passive component for one day in the year but must be seen and addressed as the important hope and continuance of a struggle to benefit all genders. Our future women deserve no less than the best they can be and our goal is to advance and achieve this.