In December 2013, the Nova Scotia government introduced a bill to create a holiday on the third Monday in February. This was partly in response to public pressure, as many other provinces and territories had already created a “Family day” in February. It was also an opportunity to acknowledge the fact that we, as Nova Scotians, have some pretty amazing predecessors to learn from, to be inspired by, and to emulate in some ways.  A campaign was proposed asking Nova Scotia school children to suggest the first 12 inspiring honourees.  For the complete list of Heritage Day Honourees click here, and this year we are celebrating the life of Rita Joe. 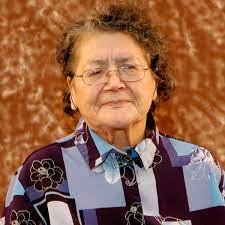 The Honourable Rita Joe (née Bernard), was born in Whycocomagh, in March 1932 and lived for 75 years.  A mother to 10 children, though often referred to as a “daughter and mother to all of Eskasoni”, has been a voice, an ambassador, and a teacher to both Indigenous and non-Indigenous people throughout Canada and the United States.  Her passion and purpose was in “speaking the truth about reservation schools, and how it is to live in a “White World” as a Native American”. The medium for Rita’s passion was poetry and her collective works provided insight into her life as an orphan and a residential school survivor.

At 46 years of age, Rita Joe published her first collection of poetry, titled The Poems of Rita Joe, (1978). Song of Eskasoni: More Poems of Rita Joe followed in 1989. Lnu and Indians We’re Called was published in 1991. Rita Joe’s poetry is included in the 1994 anthology Kelusultiek: Original Women’s Voices of Atlantic Canada. Poems from Rita Joe’s first collection can also be found in We Are the Dreamers: Recent and Early Poetry (1999). Rita Joe co-edited, with Lesley Choyce, and contributed to The Mi’kmaq Anthology (2003). Rita Joe is the subject of a 1993 National Film Board documentary titled Song of Eskasoni. Her memoir, Song of Rita Joe: Autobiography of a Mi’kmaq Poet, was published in 1996.  Here is a link to Google Books where you can take a peek at the works by Rita Joe.

While the legacy among her family and friends is likely the most meaningful, Rita was also bestowed with the following honours:

It is an honour to get to share the story of this amazing Nova Scotia woman with all of you.