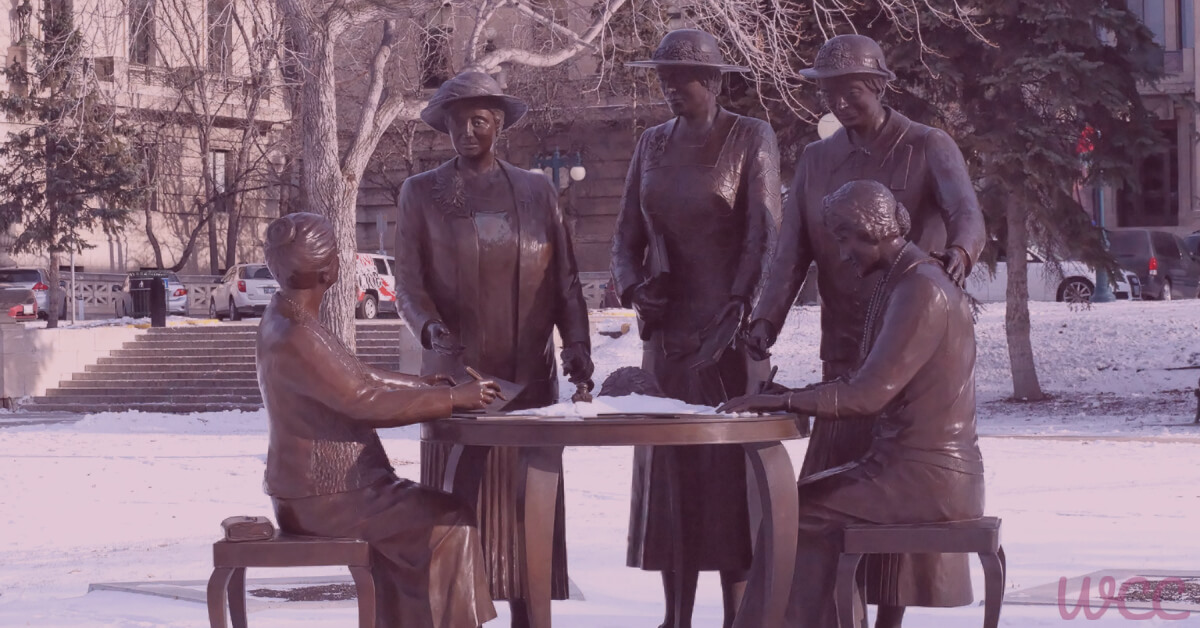 Here is a quiz on Canadian Heroines created by Merna Forster. See if you can answer the questions and recognize the Women Who Made History Then!

2. Who was the first woman in Canada to be elected as a federal member of parliament?
• A. Nellie McClung
• B. Cairine Wilson
• C. Martha Black
• D. Agnes Macphail

3. Who was the Black woman charged in 1734 with setting a major fire in Montreal to escape her life as a slave?
• A. Harriet Tubman
• B. Rose Fortune
• C. Marie-Joseph Angélique
• D. Mary Ann Shadd

4. Who is known as the Heroine of Acadia?
• A. Evangeline
• B. Françoise-Marie Jacquelin
• C. Marie-Henriette Lejeune-Ross
• D. Pélagie la Charette

5. Which of the following famous women grew up in Toronto as Gladys Smith?
• A. Marie Dressler
• B. Elizabeth Arden
• C. Mary Pickford
• D. Beatrice Lillie

6. What was the name of the talented Canadian Olympian (Amsterdam 1928) who was said to be the world’s greatest woman athlete?
• A. Fanny Rosenfeld
• B. Ethel Catherwood
• C. Marilyn Bell
• D. Myrtle Cook

7. After the outbreak of World War II this woman played an important role in organizing a school system for Japanese Canadian children sent to detention camps in the British Columbia interior. Who was she?
• A. Irene Ayako Uchida
• B. Joy Kogawa
• C. Maryka Omatsu
• D. Hide Hyodo Shimizu

9. This artist painted some of Canada’s most well-known paintings of voyageurs. Who was she?
• A. Emily Carr
• B. Laura Muntz Lyall
• C. Charlotte Schreiber
• D. Frances Anne Hopkins

10. Who was the first Canadian woman to become a nuclear physicist?
• A. Harriet Brooks
• B. Maude Abbott
• C. Maud Menten
• D. Margaret Newton

11. Who was the Mohawk stateswoman who helped the British gain support of the Iroquois during the American Revolutionary War?
• A. Pauline Johnson
• B. Molly Brant
• C. Thanadelthur
• D. Shanawdithit

12. Anna Leonowens, the onetime governess in the court of the King of Siam, became a prominent feminist in what Canadian city?
• A. Halifax
• B. Winnipeg
• C. Toronto
• D. Victoria

13. Who was the woman involved in the discovery of gold that resulted in the Klondike gold rush?
• A. Kate Carmack
• B. Klondike Kate
• C. Martha Black
• D. Nellie Cashman

14. Who was the Nova Scotia woman sentenced to death after helping people escape from the Nazis while she lived in the Netherlands?
• A. Edith Jessie Archibald
• B. Helen Creighton
• C. Mona Parsons
• D. Margaret C. Macdonald

15. On October 18, 1929 the Privy Council in England declared that under the British North America Act women were recognized as persons, who were eligible to be appointed to the Canadian Senate. The battle to gain this important right was waged by a group of Alberta women now known as The Famous Five. Which of the following women did not belong to The Famous Five?
• A. Emily Murphy
• B. Cairine Wilson
• C. Irene Parlby
• D. Louise McKinney

16. Who was the first Canadian woman to be named a saint?
(Portrait by Pierre Le Ber)
• A. Marguerite Bourgeoys
• B. Jeanne Mance
• C. Kateri Tekakwitha
• D. Marie de l’Incarnation

18. Who was Taqulittuq, also known as Tookoolito?
• A. a famous artist
• B. a guide and interpreter for Arctic explorers
• C. an Inuit storyteller
• D. a sculptor from Baffin Island

19. This famous Canadian singer was a favourite of Queen Victoria and sang at her funeral. Who was she?
• A. Emma Albani
• B. Mary Travers Bolduc (“La Bolduc”)
• C. May Irwin
• D. Pauline Donalda

20. What was the name of the adventurous woman who managed to become the first female geologist in Canada?
• A. Helen Belyea
• B. Moira Dunbar
• C. Alice Wilson
• D. Helen Hogg

21. Who was the first woman to climb Mt. Robson – the highest peak in the Canadian Rockies?
• A. Mary Schaffer Warren
• B. Georgina Engelhard Cromwell
• C. Phyllis Munday
• D. Caroline Hinman

23. Who was the first woman in the world to design an airplane?
• A. Amelia Earhart
• B. Monique Frize
• C. Olive Stark
• D. Elsie MacGill

24. Who was the woman that was one of the primary founders of Montreal?
• A. Jeanne Mance
• B. Madame Hébert
• C. Marguerite Bourgeoys
• D. Marguerite d’Youville

25. Who was renowned as “the funniest woman in the world”?
• A. Phyllis Diller
• B. Beatrice Lillie
• C. Marie Dressler
• D. Lynn Johnston